My father. He’s a hard man. We didn’t part on the best terms. I said some things I shouldn’t have said; awful words thrown at him like poison darts. I intended to hurt him.

“What does this Jesus know,” I grumbled to myself. “My father would never take me back. He would never forgive me.”

I rolled over on my mat and tried to forget standing in the crowd listening to this Jesus teach with stories. The afternoon was hot and I laid down to rest a bit to get out of the heat. People in my village told me I should at least go and listen to him. They were right. I had never heard anyone talk like that.

I tried to clear my mind, but his words replayed in my head:“I tell you that in the same way there will be more rejoicing in heaven over one sinner who repents than over ninety-nine righteous persons who do not need to repent.”

Repent. How could that even happen to a serial sinner like me? The Pharisees told me I was too far gone, that there were not enough sacrifices to cover my sin. Could my father really care that much about a nobody like me, the lost sheep, the black sheep of the family

How could he be so joyous over a totally lost person like me repenting from sin? I get it, I mean in the sense that Jesus talked about in that story about the lost coin. If I found that coin I lost last month I’d be filled with joy. But I hardly think I have that much value, certainly not the value of a silver coin. I don’t think my father would waste time searching for me, someone with such little value.

I rolled on my back and stared at the ceiling. All I could think about was how I squandered so much of my life, my time and my resources on worthless things. I felt like that son in the story Jesus told, the son who took all his father’s inheritance and spent it on wild living. I too would willingly be a slave in my father’s house just to share in his abundance, just to have a small portion of his wealth.

Unable to sleep, I left my mat and walked to the front door. The rotted wood door creaked when I opened it and flakes of plaster fell from the wall. I stepped outside then sat on the front step and watched the people milling about the neighborhood. I looked down the street and noticed the shadows of people moving on the walls of the buildings. A dusty haze lingered, stirred up from the movement of people and animals. I imagined what it would be like to see my father on the street spot me sitting here, then run arms open to hug me. No one was ever that excited to see me. Could it be possible?

#WednesdayWalk Through the Bible — an exploration of what unknown people might have seen or felt when they witnessed the events in the Bible. This post is from the perspective of a person who heard Jesus tell the parables in Luke 15. 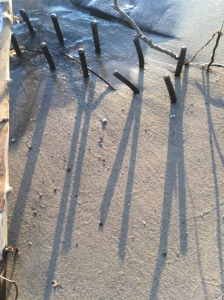 5 thoughts on “#WednesdayWalk — Too Far Gone?”

View all posts by CG Thelen